How do you assess the situation in Syria during 2021?

The year 2021 was one of the harshest and most bitter years in the Syrian ordeal that spanned more than 10 years ago. As the pain multiplied and the suffering was great, and extended in depth and breadth to include all Syrians throughout the Syrian land and beyond, albeit to varying degrees, the lack of security and safety, the lack of means for a decent living, And the exacerbation of the motives of migration and asylum and the increase of asylum seekers, becoming the only common option in all regions.

It seems that the new year closed the door to the “Constitutional Committee” after the Russian statements that revealed the essence of its existence and work, which were recently made by Lavrentiev. After 3 years and 6 empty rounds, it remained in place and in the interest of the regime and its Russian supporter, the owner of this innovation in Sochi.

What are the reasons for the failure of solutions to the Syrian crisis?

Allow me, first of all, to object to the characterization of the “Syrian crisis,” which should be replaced by the “Syrian cause.” What happened and is happening in our country a decade ago is not a crisis. It is a people’s issue, legitimate rights, goals and sacrifices, and the will of a generation of young people who want to create their own future.

Throughout history, due to its geographical and cultural location and its geopolitical value, Syria has always been a subject of international interest, a target for regional and international projects, and thus a field for its political, diplomatic and military interventions, which turned our country into an arena for conflict in and against it.

Despite the availability of the theoretical political structure for a solution through the necessary UN resolutions, and the multiplicity of tracks and attempts. However, the zero sum prevails, as a result of the lack of international will to approach the solution seriously, nor the American-Russian consensus on the necessity of implementing it. Because Syria is the base of the “Iranian project” that the mullahs’ regime is implementing in the region. And the “Russian occupation” made our country at the center of the equation of deals, concessions and mutual interests in the region and at the international level. Without neglecting the role of the disruption of the Arab situation and its exit from the levels of power and influence in this conflict. This made his active and positive role non-existent. It is not for us, as Syrians, to renounce our share of responsibility, individuals and institutions, for what we did and did not do, in order to provide a decent presence for our people behind their cause, and to strengthen their national unity.

Do you think that anything can change in the course of the political solution during 2022?

Unfortunately, milestones of change are not within reach this year. Unless dramatic developments occur inside Syria. The region is still reeling with eruptions, collapses and coups. The Arab regimes have become mired in their crises that threaten the existence of these countries. The factors of international conflict and the contradiction between the agendas and the network of interests are escalating to the point of contradiction. In addition, American interest in our region is declining in favor of interest in the Far East. All this makes the necessary consensus on the Syrian issue and finding a solution to it still beyond the limits of vision.

The US policy of strategic patience will continue to address the region’s issues that are closely related to the Iranian nuclear file and the Vienna talks. The wait-for-all policy continues after controlling for potential explosions by reducing friction and collision sites. And opening security and political dialogues between the de-facto authorities and their international protectors to keep matters under control. While the Syrian people, with all their components and in their various locations, are still under the weight of protracted crises: from poverty and hunger, to arrest, killing and displacement, to the mud and pain of the camps, to the seas of asylum. 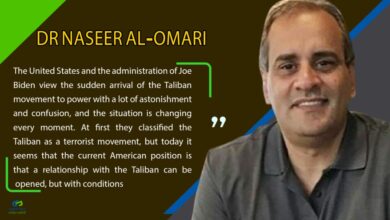